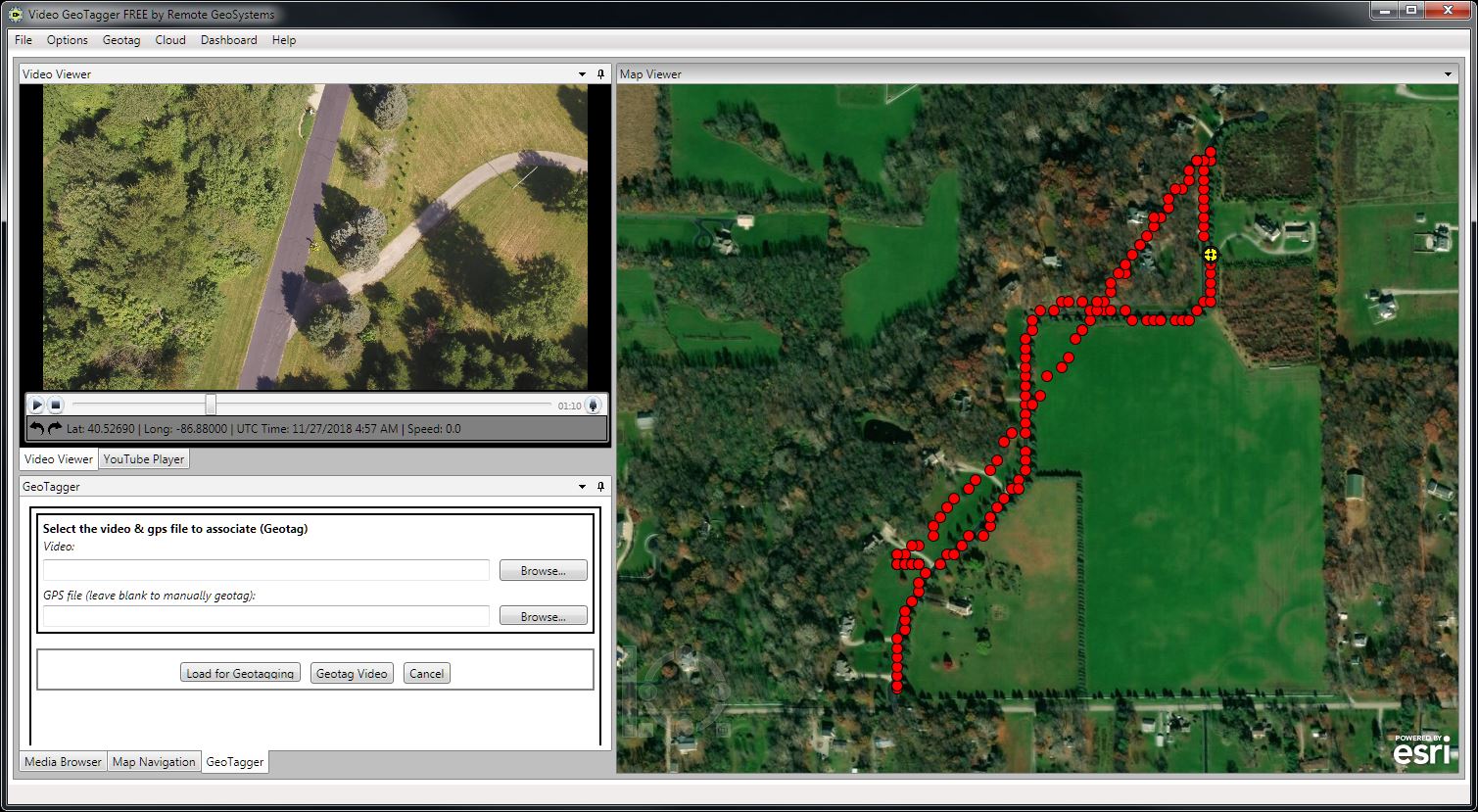 When dealing with data gathered from UAS, one common issue that first responders will run into is the limitation of how long it takes to turn a series of images into an orthomosaic and digital surface model.  The data gathered certainly can be used to query massive amounts of information about the environment but in situations where fast responses are required, this may not be an option.  This is where geospatial video comes into play.

Geospatial video is an emerging technology in UAS that can be used to gather measurements in real time.  The process requires an aircraft capable of recording its GPS location along with the video normally captured.  The log files from the aircraft are combined with the video after flight to create a set of coordinates showing the locations of certain events in the video.  This can be particularly useful for being able to review the imagery gathered by clicking on a point on the map and watching the associated segment of the video file.

Since this doesn’t actually do any editing of the raw imagery from the aircraft, the processing only takes a few minutes to complete.  The data may not be able to give a direct measurement of elevations of the ground, but it can be used for situations like fire fighting where exact locations accurate to within a foot are not necessary.  If firefighters were to use orthomosaic based image processing, the fire would likely have already destroyed the building or section of forest before a map could be created.

During my experiments, I used the free software VideoTagger by Remote Geo.  The free version does have limitations on what kinds of files it can output but these limitations are well within the range of reason for what I was doing.  To get started, I didn’t like how the map only showed streets.  I found an option in the toolbar to change it to an imagery base layer which allows me to see features on the ground such as trees on the map.

Now that I can see close-up objects, I can load the video and GPS log files into the software using the Geotagger tab.  Since the video and GPS points may be off by a significant amount, they need to be matched using the Geotag function.  This can be done by finding a defining point in the video such as crossing a road or making a turn and pausing the video.  The associated GPS point can be selected and geotagged to create a link between the video and the GPS log.  I added a few more points and the start and end waypoints to the video to make sure they played properly for the whole duration of the flight.  To finish the process, the software will take these known locations and times within the video to connect the remaining GPS points to specific frames in the video.

To test the system further, I loaded another dataset from a recent controlled burn.  The process worked the exact same way and worked although with some bugs.  The software appears to play the points out of order if it isn’t closed and reopened between processing and playback.  Reopening the processed output files however fixed the problem and the data was correctly presented for review.

In conclusion, this software is capable of creating connections between the video and GPS coordinates of the data log.  This can be useful for doing quick reviews of the surroundings in situations where a quick data turnaround is necessary.  It does however have limitations on how it can be used since no elevation data can be extracted from the imagery without further processing.  It also needs definable objects to be visible such as streets or buildings when setting the geotags, so this may not be the best solution when flying over environments such as forests or lakes which have no definable features.