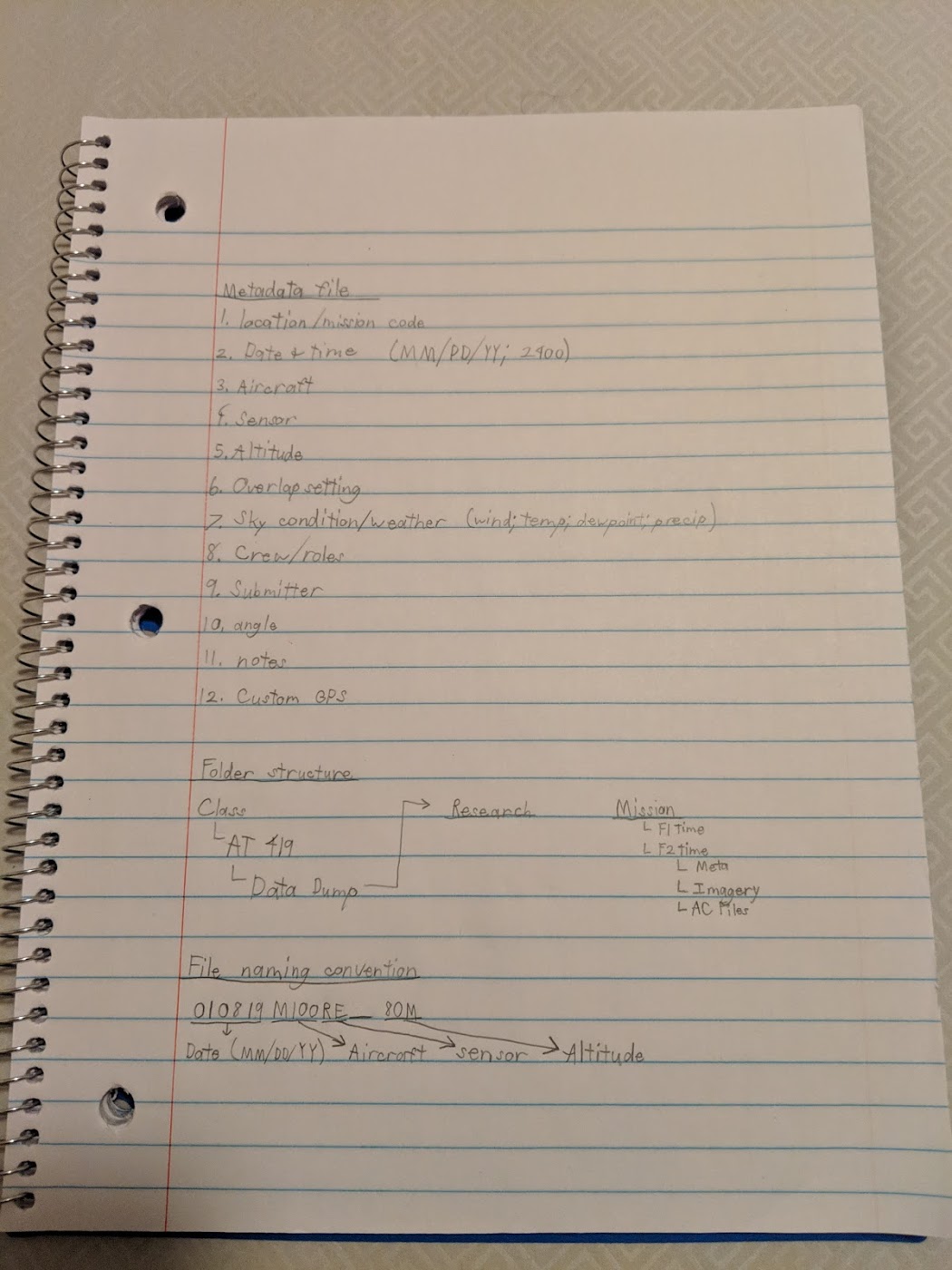 The semester has officially started and with that comes all of the prep work needed for the project to be successful. The Matrice camera integration is complete, so that puts a bit ahead of schedule since we won’t have to spend any more time setting up hardware. The main purpose of our first meeting was to set up our file structure and define how data would be uploaded to the servers after flight but we also discussed plans for moving forward.

Evan’s project for the break was to design a file structure and naming convention for the data gathered so we could discuss and tweak it when we came back to class. His idea was to create a data dump folder which everyone has read and write access to. Each flight would be named according to a naming convention at the end of each flight and uploaded into the folder. This has the advantage of being simple to find and less likely to have data being left where it shouldn’t be. His other idea of giving the data dump folder a series of subfolders for sorting datasets by aircraft type and other metadata was ruled out since data from flights could be easily misplaced or contaminated.

From the data dump folder, Evan will move the data to another network share named ‘research’. This share can only be written to by him but everyone in the class can read from it. This will prevent the data from being contaminated during post process. Once the data has been processed, the team members can give the data to Evan to be put on the research drive in a folder specific to post processed data. This can be seen in Figure 1 which outlines the whole process.

With the folder structure set, we began working on setting up rules for the metadata file that will accompany each flight. It will be a text document form that we fill out for each flight and include data such as:

The folders containing each flight will also need a naming convention. When I worked at Acre this was a critical step in the data pipeline since it could be very difficult to figure out where an image set was taken if it was mislabeled. We settled on a naming convention that included the date, aircraft, sensor, and flight altitude. If multiple flights are flown on the same day, multiple folders will be made within this folder to differentiate when each flight happened.

One of the platforms we will be flying this semester is the DJI Matrice 600, or M600 for short. This is basically the larger 6 rotor version of my M100 and we plan to use it for flying a Zenmuse X5 camera and possibly a RedEdge Altum. The Zenmuse should go on without trouble since it is made by DJI and listed as one of the compatible cameras but the Altum will need some work to integrate with the platform. I am expecting this to go very similar to the M100. I was concerned about how well the X5 camera would be able to focus on distant objects but after doing some research on the topic I feel more confident that it will be a good fit for our project.

This week I plan to make sure the firmware on the M600 is up to date and ready to go. This will speed things up a bit once the sensors are integrated and all the hardware is ready to fly.