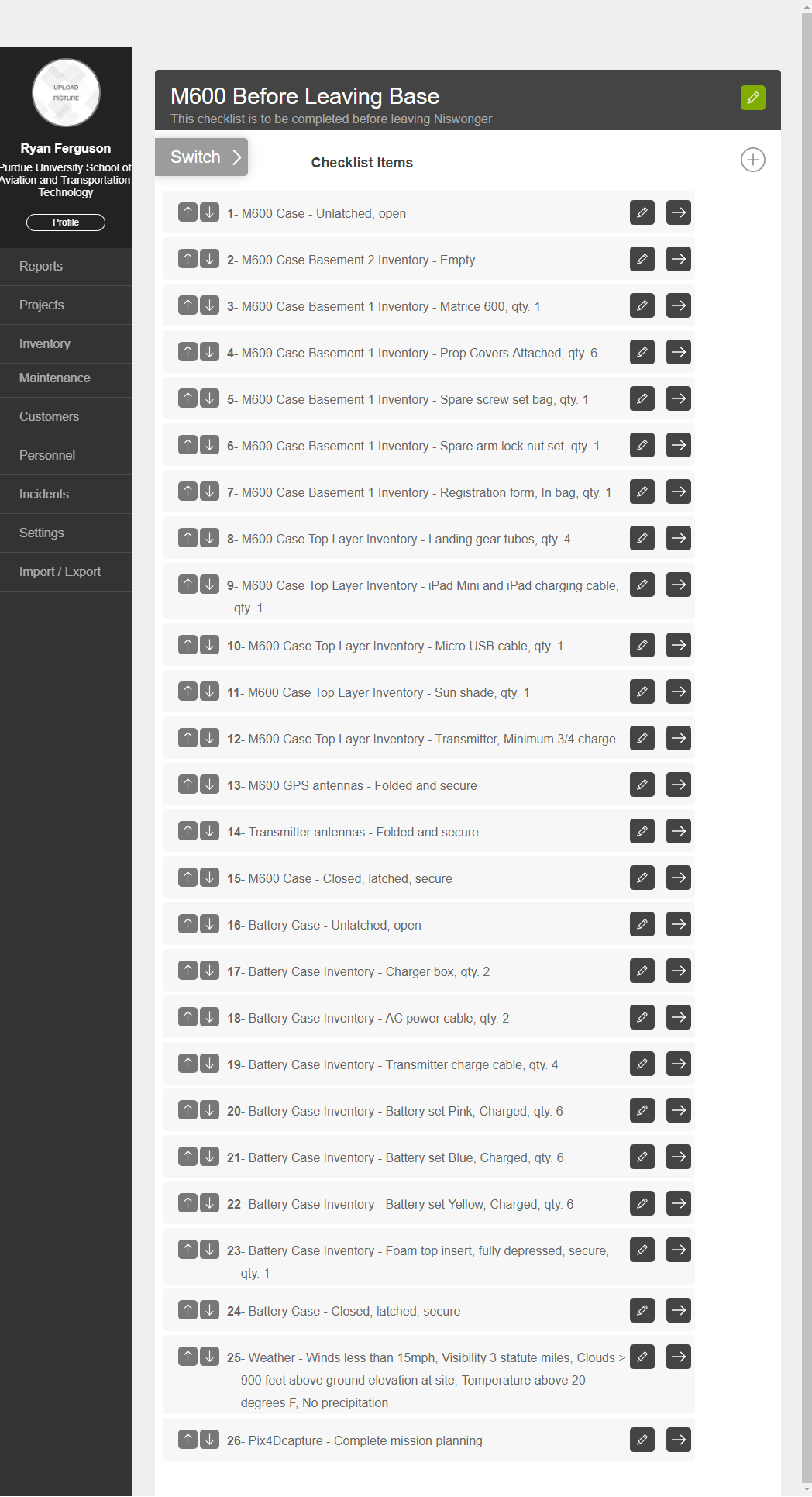 As I mentioned before, the research project we are doing will involve the use of a Matrice 600 platform. This is a project I have been working on over the past 2 weeks with multiple iterations but ultimately a decision was made to use several different checklists with Drone Logbook for different phases of the operation. This will make the checklists easier to follow and considerably shorter in comparison to having a single checklist for the whole operation.

While developing the checklist, I also wanted to use terms that would be easy to identify. This can especially be seen in the inventory checklists for the M600 case where instead of identifying layers as “layer 1” or “layer 2” I instead had an idea to follow a similar scheme to building floor numbers. If an individual is directed to go to basement 2 of a building, chances are they will be able to identify that this floor is the 2nd floor below ground level. I decided to name the layers of the M600 using this same scheme by calling them “Top Layer,” “Basement 1,” and “Basement 2.” This will hopefully avoid confusion among operators regarding whether the layers are ordered from top down or bottom up.

When an operator starts running the checklist, they will start with the “M600 Before Leaving Base” checklist which gives individual steps to be followed in order. The checklist requires the operator to take inventory and pack all equipment to be used in the field, check the weather minimums, and perform mission planning in Pix4Dcapture. It also has the operator verify the charge level of the batteries in the controller and M600.

Once the operator arrives at the field, they will switch over to the “M600 On-Site Checklist” which gives directions to unload and assemble the M600, calibrate the sensors, takeoff, and calibrate the camera. From there it goes into detail about how to switch the controls over to Pix4Dcapture to do autonomous imaging of the area. Since the weather forecasts can change very rapidly, the checklist also reminds the operator to check the conditions before takeoff. It also gives the operator directions of how to disengage autonomous flight by switching into “P-mode” flight which reverts the flight controller to a GPS assisted flight mode.

A very similar checklist also exists called the “M600 Between Flights Checklist” which as the name implies, is to be run between flights. It tells the operator how to takeoff and land the M600 and provides direction on changing the SD card between flights to prevent data contamination.

The only checklist that remains is the post-flight checklist. It gives the operator directions on how to safely land, disassemble, and pack the M600. It also tells the operator to run an inventory check in the field so nothing goes missing. A flight log is also included in this checklist so the operator is less likely to forget to fill out the flight information.