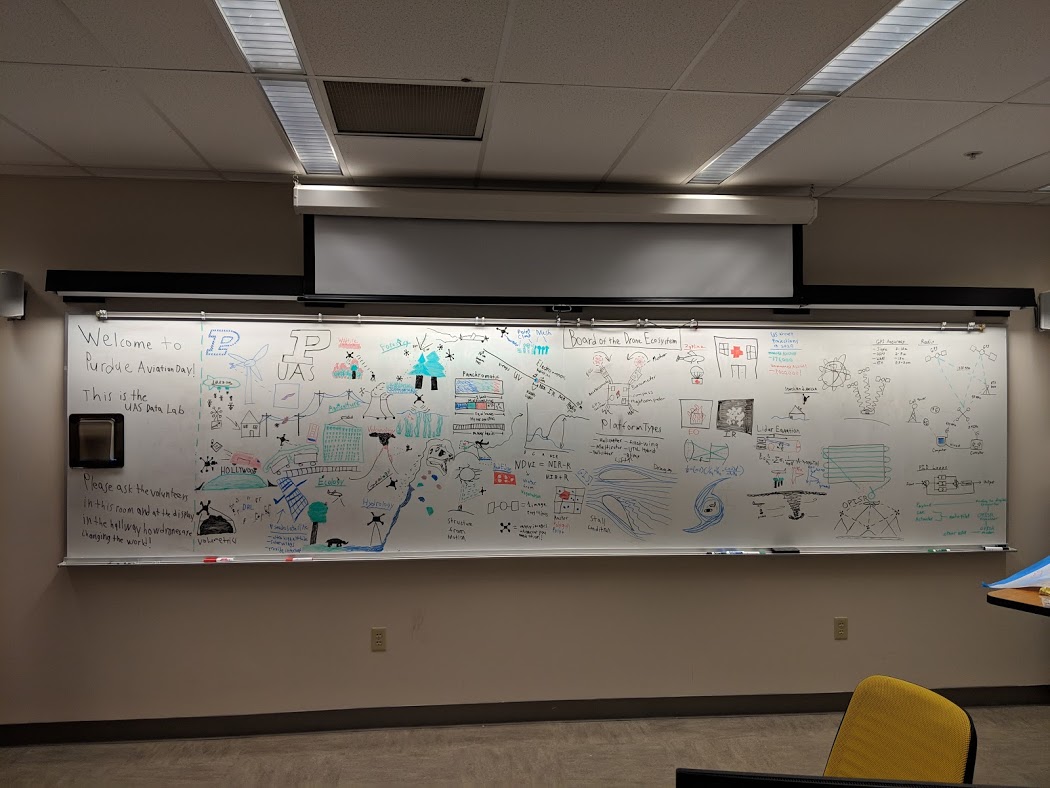 Every year, Purdue hosts an event known as Purdue Aviation Day, or PAD for short. Since I am part of the inaugural class of UAS, I am consistently asked to volunteer for it each year. In previous years, we were given spaces in hangars to do demo flights of smaller indoor aircraft but this year was more focused on demonstrating data processing capabilities thanks to the new lab and recent hire of Professor Hupy to teach us about data processing.

Since the general public tends to have little experience with data processing or UAS as a whole, we decided to try to demonstrate using visual elements what we do. This included pulling up point clouds and completed maps in Pix4D on some of the desktops and loading my OpenDroneMap deployment on some of the presenting screens. We also filled the whiteboard with images and short descriptions of the many topics related to UAS. The whiteboard can be seen in the featured image at the top of this post.

The DIY RTK system was also able to make a guest appearance but due to a large number of obstructions inside the building, I was unable to get a GPS lock of any sort. This was to be expected but there wasn’t much I could do to change it.

Since people would be filtering through the lab during the event, we decided to avoid doing any long presentations which would cause our audiences to loose interest. Instead, we opted to have smaller conversations with whoever may show up. This turned out to be very effective as visitors didn’t feel the need to stay for long periods of time and we were able to have more personal discussions about what we do.

Of course, it wouldn’t be an interesting event if I didn’t get to take lots of photos of the many aircraft that came to visit. I brought out my zoom lens and started taking pictures of the A-10 Warthogs as they did their airshow. Below you can see some of the pictures of them running up and flying low and fast.

I also can’t deny that I have a thing for the smaller aircraft and one in particular caught my eye while I was there, the Christen Eagle II. This is an acrobatic biplane which makes it very unique compared to many of the more modern aircraft designs. One of the first model aircraft I ever owned was actually a Christen Eagle, so this one has a more personal connection to me than many of the other aircraft at the event.

As a whole, I enjoyed Purdue Aviation Day and feel it was a good opportunity to spread awareness of the UAS program and see some interesting planes. I look forward to seeing what it brings next year.